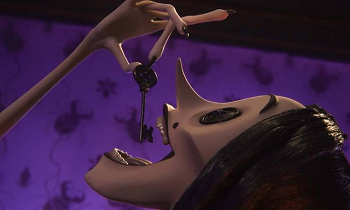 A character swallows a key for safekeeping, whether to lock something or someone inside a device or room. Since you usually don't get something back once it's been swallowed, this typically serves as visual shorthand that the character in question has no intention of the lock it goes to being opened, ever. It also makes an effective way of enforcing that desire; whatever happens with that lock from this point onward, it's usually a safe bet that it won't involve that key being used to open it.

Subtrope of Eating Solves Everything. Sister-trope to Eat the Evidence. May be indicative of Crazy Consumption. See also Stomach of Holding, Extreme Omnivore. Compare Treasure Chest Cavity, Phlebotinum Muncher. Could be a rather unfortunate outcome of Pet Gets the Keys or Jail Bake.

A Tight Hold on the Keys

Professor Farnsworth swallows the key to the ship to prevent his employees from wasting fuel.

A Tight Hold on the Keys

Professor Farnsworth swallows the key to the ship to prevent his employees from wasting fuel.