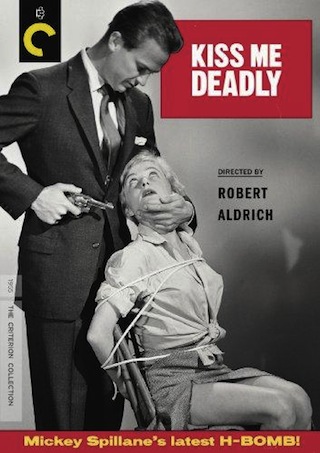 Christina Bailey: You have only one real lasting love.
Mike Hammer: Now who could that be?
Christina Bailey: You. You're one of those self-indulgent males who thinks about nothing but his clothes, his car, himself. Bet you do push-ups every morning just to keep your belly hard.
Advertisement:

Spillane didn't much care for the film, as it actually deconstructed his macho, tough guy creation and differed from the original story by involving Cold War espionage and a nuclear MacGuffin. Originally unsuccessful upon its theatrical release, it is now considered one of the classic examples of Film Noir and was later cited as influential among directors of the French New Wave and also Quentin Tarantino when he made Pulp Fiction.

A terrified young woman named Christina Bailey (Cloris Leachman in her first credited screen role) wearing only a trenchcoat is running down a highway at night. She stops a car driven by private divorce detective Mike Hammer. He picks her up, from then on becoming embroiled in a plot involving murder, missing scientists and a mysterious box...