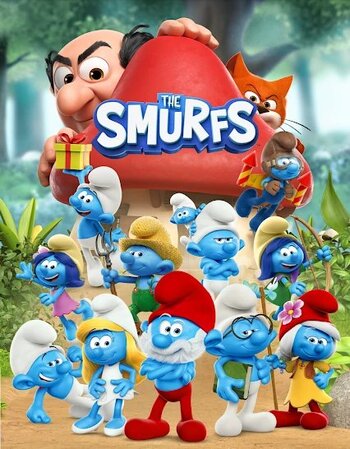 The Smurfs is a Belgian All-CGI Cartoon produced by IMPS (Peyo Productions) and Dupuis Audiovisuel. It is the third animated series starring the titular characters created by Peyo. It began to air worldwide on April 18, 2021 on RTBF's La Trois channel in Belgium and on May 9, 2021 on TF1 in France. It made its first broadcast on September 10, 2021 on Nickelodeon in the United States. It features characters that were introduced in the 2017 animated film Smurfs: The Lost Village.note It's set in a separate continuity from the films itself. Since the characters also appeared in "The Village Behind the Wall", a series of stories that are set in the comic book timeline of the franchise and feature The Lost Village characters. In 2022, the show was greenlit for a second season, along with a musical animated film distributed by Paramount Pictures which is currently set to release on February 14, 2025.

Spoilers abound, so be careful!