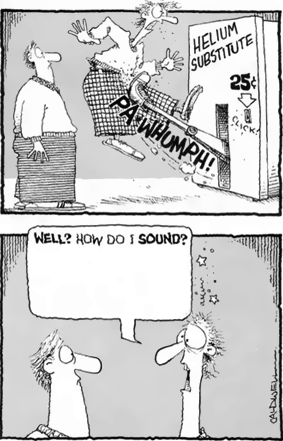 "Wadda ya tryin' to do; make me a soprano??"
— Drunk responding to Larry kicking him in the nuts, Leisure Suit Larry 1: In the Land of the Lounge Lizards
Advertisement:

A comic follow-up to a Groin Attack, this is when a male character whose gonads have suffered injury cries out or speaks in a much higher frequency than his voice usually displays. Most often it's just a brief squeak of anguish, surprisingly high-pitched; in more extreme cases, he may talk, whine or even sing in falsetto for a time, or have his voice dubbed temporarily by an actress.

Less slapstick-oriented works sometimes reference this phenomenon, as when a Deadpan Snarker taunts a male with a high-pitched voice about his Vocal Dissonance, or The Snark Knight narrowly avoids a Groin Attack and muses how close he came to playing this trope straight.

While shrill yelps at the initial injury may be justified, prolonged high-pitched speech is a misconception, based on the false notion that eunuchs' voices are always high-pitched. In actuality, while boys whose testes are lost before puberty will retain a high vocal range into adulthood, a grown man whose voice already changed in adolescence can't lose his masculine tone of speech due to testicular injury: his larynx (voice box) has already grown to a larger size that produces deep sounds, and lack of testosterone won't make it shrink. Castration is not retroactive.

Is somewhat Truth in Television, as you may hear some wincing and yelping after. But rarely exaggerated to the point of some of these examples.

Subtrope of Vocal Dissonance. Works that overplay it follow it up with Share the Male Pain. Helium Speech is a non-painful variant. If he's trying to say his Catchphrase while this trope is in play, it's a case of Alternate Catchphrase Inflection.

Not related to Innocent Soprano, or The Sopranos, unless the mob is fighting really dirty.

Under the effects of the Mario mask, a startled Luigi goes insane and starts knocking over everything. Mario is only convinced to try stopping him after taking one to the pingas, complete with his voice temporarily raising in pitch.

Under the effects of the Mario mask, a startled Luigi goes insane and starts knocking over everything. Mario is only convinced to try stopping him after taking one to the pingas, complete with his voice temporarily raising in pitch.