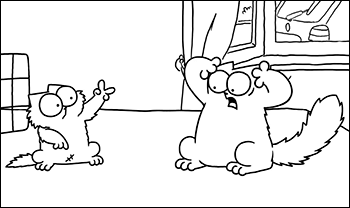 Wilma: Fred, do you have to get Dino so wound up when you come home?
Fred: It's not my fault. Maybe he'd calm down after we have him fixed!
Dino: WHAT!?! (he runs away)
— The Flintstones
Advertisement:

Spaying and neutering are a common procedure performed on animals where all or most of their reproductive organs are removed. This reduces behaviors such as mounting, urine spraying or marking, female heats (often messy in dogs, can be noisy in cats), and forms of male aggression, which are highly undesirable activities in domestic animals. Additionally, eliminating a dog or cat's ability to reproduce helps reduce their numbers in a world where there are more dogs and cats than there are homes for them.

In fiction, Sapient Pets are not so understanding of the practical reasons for why they are spayed or neutered. Whatever the benefits, they just don't want their reproductive parts cut off. Talking Animals may protest the procedure, and others may attempt to avoid the procedure at all costs. May also render an animal Afraid Of Vets if it knows this is one possible reason for veterinary appointments. Sometimes combined with Share the Male Pain, if male animals (and/or male owners) flinch and cover their privates at the mere mention of the process. If the animal gets its way and avoids being neutered, Animals Lack Attributes is defied. If the animal doesn't get its way, it might get a Crippling Castration and likely become a Lazy Neutered Pet.

The failure to avert this fate can be used a Freudian Excuse for animal examples of Eunuchs Are Evil.