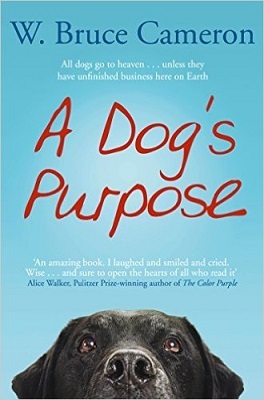 After a tragically short life as a stray, Bailey is surprised to find himself reborn as a new puppy. He is taken in by a loving family, and becomes especially close to the son, a young boy named Ethan. Throughout the years that Bailey lives with them, he decides that his purpose in life is to be with the boy, to have fun with him and protect him.

But that isn't the end of Bailey's journey. As he is reborn again and again, he begins to wonder: what is his purpose on this earth?

There are also a series of children's books themed around the puppy days of the protagonist's lives.

A film adaptation starring Dennis Quaid and the voice of Josh Gad was released on January 27, 2017, by Universal and Amblin Entertainment. A film adaptation of A Dog's Journey came out May 17, 2019 to less fanfare.

Compare to A Dog's Way Home, a similar book and Live-Action Adaptation also written by W. Bruce Cameron that stars a dog named Bella as she tries to get back home.