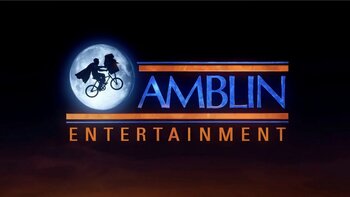 The logo, featuring E.T. and Elliot on the flying bicycle in E.T. the Extra-Terrestrial.
Advertisement:

Amblin Entertainment is a company founded by Steven Spielberg in 1981, originally serving as his main production company. It is named after Spielberg's first completed film, a short called Amblin. From 1991 to 1997, the company had an animation unit called Amblimation.

Largely due to Spielberg's clout, Amblin became one of the biggest independent production companies in Hollywood. Its best-known output was released during The '80s, when Spielberg oversaw the production of blockbuster family comedy/adventure films such as The Goonies and the Back to the Future trilogy. Nowadays, the term "Amblin-esque" is used frequently by entertainment websites to describe the tone of recent movies and television series influenced by the aforementioned films, including Super 8 (itself an Amblin production) and Stranger Things.

In December 2015, Amblin underwent a major reorganization and became a unit of the new Amblin Partners. Under this structure, it will focus primarily on family-themed films.