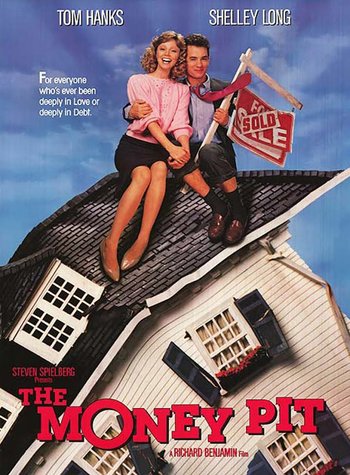 A 1986 film comedy directed by Richard Benjamin, co-executive produced by (and presented by) Steven Spielberg, and starring Tom Hanks and Shelley Long.

Entertainment lawyer Walter Fielding (Hanks) and his violinist girlfriend Anna (Long) are swindled into buying an old house that's falling apart at the seams. As they keep getting further in debt in their efforts to restore the house, the pressure starts taking a toll on the couple.

Basically an '80s answer to Mr. Blandings Builds His Dream House, this film is part of Tom Hanks's early run of comedies made prior to Philadelphia. It was also one of the reasons Shelley Long quit the cast of Cheers, as she hoped to make a transition to movie stardom.

The Money Pit provides examples of: