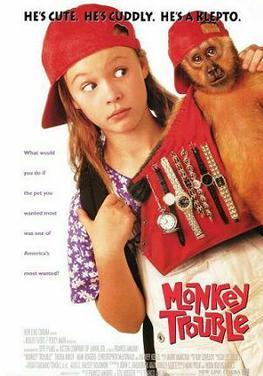 What would you do if the pet you wanted was one of America's Most Wanted?

The film opens to a carnival where a man named Azro is entertaining a crowd of people with his trained Capuchin monkey. His money making is short lived when a couple of men catches on to Azro’s ruse of having his monkey steal values from his costumers when they hand money to the monkey.

Meanwhile, nine year old Eva Gregory longs for a pet to call her own after feeling left out and ignored when her new baby half-brother arrives. Unfortunately, not only is Eva’s stepfather Tom allergic to fur and she can’t keep a pet at her father’s house for him being a pilot and thus travels a lot, but her mother Amy doesn’t believe she’s responsible enough.

One day, the monkey runs away from his gypsy thief master who blames him for his domestic woes and winds up at Roxbury Memorial Park. There, he sees Eva walking through the park from school and shows himself to her. After naming the monkey “Dodger,” Eva decides to adopt him. Taking him home, Eva soon finds keeping Dodger a secret quite difficult so she decides to keep him at the pet store after explaining to the pet store owner that Dodger’s a surprise present for her mother and he dad wants her to train him so Eva wants him at the store while she’s away.

Eva soon learns of Dodger’s talent of thievery when at a grocery store, Dodger steals food and hides it in Eva’s backpack but she returns it. After finding stolen jewelry upon returning home, Eva starts teaching him not to steal all the while Azro’s looking for his monkey.