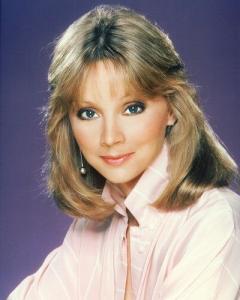 Shelley Lee Long (born August 23, 1949 in Fort Wayne, Indiana) is an American television and movie actress. She is most famous and well-known for her five-year (1982-1987) portrayal of the academic-turned-waitress Diane Chambers of Cheers. She also starred in various films—typically romantic comedies—both before (Night Shift, Losin' It) and during (Irreconcilable Differences, The Money Pit, Hello Again) her time on the show, before she ultimately left the cast in 1987 to focus both on a film career and raising her daughter. Her most well-known work post-Cheers includes Outrageous Fortune (in which she co-starred with Bette Midler), Troop Beverly Hills, and The Brady Bunch Movie.

As a rule, particularly in The '80s, she's known for playing a Nice Girl, usually spoiled but nice or otherwise naive in the ways of the world (often a Wide-Eyed Idealist), who can be expected to end up finding herself out of her league, but nonetheless has or eventually finds the pluck to overcome the obstacles in her Character Arc. (Think Jimmy Stewart crossed with Audrey Hepburn, in the form of a pretty and highly feminine blue-eyed blonde woman...)

In 1993, she returned to television by guest-starring as Diane in the Cheers finale. Following this, she starred in a high-rated but short-lived (due to problems with Long's health) series Good Advice, in which she played a marriage counselor with an office next to that of a divorce lawyer. She later had a recurring role as a jealous Cloud Cuckoolander ex-wife in Modern Family.