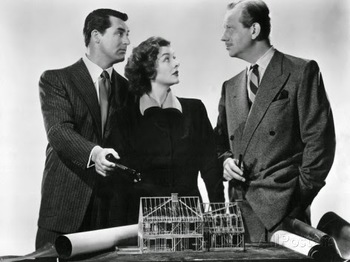 A 1946 novel by Eric Hodgins (inspired by the author's own experience building his home), adapted into a 1948 film of the same name directed by H.C. Potter, starring Cary Grant, Myrna Loy, and Melvyn Douglas.

The 1986 Tom Hanks film The Money Pit was intended to be a modern version, except the house doesn't get torn down and rebuilt.

The 2007 film Are We Done Yet is another remake, sequel to Are We There Yet?, starring Ice Cube.

The main character is James Blandings (Grant), a successful advertising executive. He and his wife Muriel (Loy) grow tired of their cramped Manhattan apartment and seek out a country estate in Connecticut. They fall in love with "the old Hackett place", an old farmstead with a dilapidated colonial farmhouse. They initially plan to renovate the house but eventually decide to tear it down and build new. The rest of the story is a series of disasters as they overspend their budget and fight with contractors.