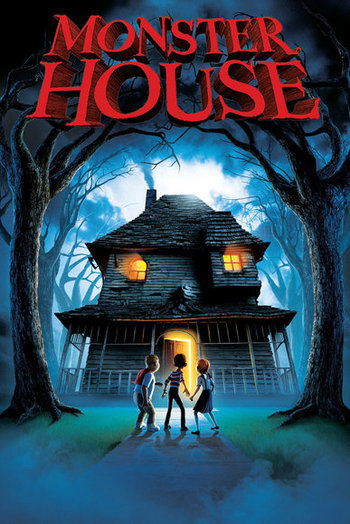 Monster House is a 2006 computer animated and motion capture film. It was produced by Steven Spielberg and Robert Zemeckis, written by Dan Harmon and Rob Schrab, and directed by Gil Kenan.

The movie focuses on DJ Walters (Mitchel Musso), a boy who is convinced that there's something strange about the house across the street, and believes the house across the street from him is alive. When his parents (Catherine O'Hara and Fred Willard) go away for the weekend, he tries convincing his babysitter Zee (Maggie Gyllenhaal) that there is something wrong about the house. She does not believe him, so DJ enlists the help of his best friends Chowder (Sam Lerner) and Jenny (Spencer Locke), a girl selling Halloween candy (and who nearly gets eaten by the house). Together, the three of them try to destroy the monster house, along the way figuring out its secret.