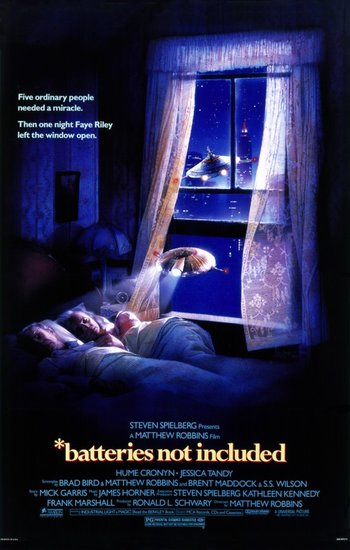 *batteries not included is a 1987 sci-fi/fantasy film produced by Steven Spielberg, directed by Matthew Robbins, and starring Hume Cronyn and Jessica Tandy.

The inhabitants of an old apartment building, under threat from unscrupulous developers, are visited by mysterious mechanical creatures resembling tiny flying saucer machines. The appearance of the living machines, later called "The Fix-Its", make life easier for everyone. They go about restoring the (recently trashed) cafe, fixing the tenants' belongings, and bringing the residents together.

The story was originally pitched as an episode of Spielberg's TV series Amazing Stories before he decided to develop it as a feature film. Brad Bird was one of the screenwriters.

The title is a play on "Batteries not included", a common disclaimer on such electronic toys as the Fix-Its resemble.