I'll Be Your Best Friend 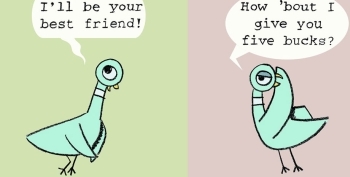 Sorry, dude, still not letting you drive the bus.
Okay, Alice is trying to get some MacGuffin from Bob, but Bob doesn't want to give it up for free. Alice really doesn't have anything of value to offer, but she doesn't want to just let Bob walk away with the MacGuffin. In desperation, she says "I'll be your best friend!" This Stock Phrase is the staple of every character who fails at negotiation. Characters using this may sometimes combine it with offering a Comically Small Bribe.