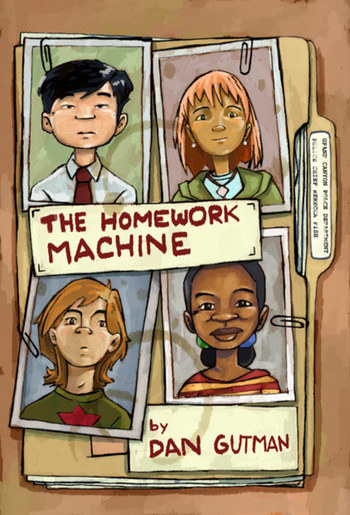 What if you never had to do homework again?note Pictured from left to right: Brenton Damagatchi, Kelsey Donnelly, Sam "Snick" Dawkins, and Judy Douglas.
"Seen a lot of strange stuff go down in 10 years working here, probably has something to do with being so close to the canyon. Having a mile deep hole in your backyard brings out the weirdness in folks. I remember that time the gambler from LA lost a bet in Las Vegas, and his friends drove him up here; forced him to parachute into the canyon, guy almost died. You get all kinds in this part of the country, the canyon attracts 'em like flies to dog doo... But this recent situation involving the children, was one of the stranger cases I ever ran into..."
— Police Chief Rebecca Fish

In an interview room sits a police officer, and a girl named Kelsey; the latter of which is considered guilty of a crime. The child is demanded to give a testimony and is being recorded by cameras and microphones, all eyes and ears on them. The girl parts her lips, and begins to talk.

Brenton Damagatchi, Judy Douglas, Sam "Snik" Dawkins, and Kelsey Donnelly are all 5th grade students that only share one thing in common: their last names all start with a "D". Apart from that, they're nothing alike, Brenton is the typical smart kid who gets perfect grades, Judy always looks up to the teacher, Sam is a class clown who doesn't play by the rules, and Kelsey doesn't care enough about her grades to do any real work. Despite this (and largely because their teacher assigns seats in alphabetical order), they're all forced to sit together in class, with only their last names keeping them together...

At least that's what you may be led to believe.

All these kids (who cheekily named themselves "the 'D' squad" due to their last names) do share something else: a secret that if revealed, could have massive repercussions within the school district and within the county itself.

A 2007 novel by Dan Gutman, The Homework Machine is about the social repercussions of the eponymous device, and a commentary on the inner workings of the American Education System. The book's narrative is told in a series of testimonies provided by the 4 lead child characters, as well as their parents, the teachers, and the staff of the school they all attended. The testimonies are provided in the order they were taken, but said testimonies do not tell the story in the order that the events took place.

Was followed by a sequel in 2009, Return of the Homework Machine.

The Homework Machine contains examples of: