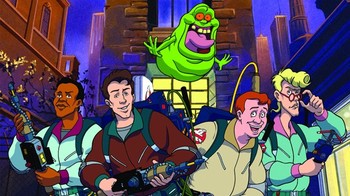 The Four Man Band is a primarily comedic group, designed for a sitcom or domcom. The four distinct personalities are specifically designed to play off each other so that whatever happens that day, Hilarity Ensues.

Please note that this trope does not include The Hero. The focus is evenly spread among them. The Protagonist can easily be any one of the Band, or the focus can just be switched between episodes to different characters. Even the four roles can be shuffled around a little.

Compare Comic Trio (where The Casanova Wannabe leads, The Butt-Monkey goes along with him, and The Only Sane Man complains but is ignored). For the Distaff Counterpart, see Four-Girl Ensemble.

Lupin III reminds us that situational comedy humour can be found in many genres.

Doraemon Nobita and the three neighborhood kids he interacts with the most.

The Secret of NIMH

The Beatles in A Hard Day's Night and Help!

The Lord of the Rings

The Mummy: Tomb of the Dragon Emperor

The main characters themselves:

The Hitchhiker's Guide to the Galaxy

The Fresh Prince of Bel-Air

It's Always Sunny in Philadelphia note First Season only

Shameless (UK) has the Maguire boys

The Young Ones (Alternate Character Interpretation)

The Young Ones (Alternate Character Interpretation)