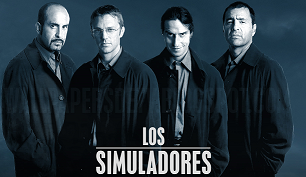 "They are the kind of people that can solve any kind of problem"
"Why should you stop solving problems, when you know you have a gift for it?"
— Mario Santos
Advertisement:

Los Simuladores (lit. "The Simulators", or more accurately "The Pretenders") is an Argentine TV series that ran for two seasons, from March 2002 to December 2003.

Los Simuladores are four-man secret organization that can "solve all kinds of problems"... for a fee. And no, they're not the bad guys.

This group helps people who are desperately in need, by doing something they call "drills" (lit. "simulations" - hence the group's name) which involve complex plans that one way or another solve the problem. This may or may not involve deceiving the person with said problem, and always involves deceiving a whole bunch of other people.

The sufferings of the person in need range from "owning money to the mob" to "having to introduce your family to your future in-laws", but could still ruin their life. Then some former client has to tell him/her how to contact Los Simuladores, who in turn will see if his/her problem is worth their time. Said person is usually charged a huge sum of money for the drill (twice the costs), but the group is willing to help those who can't pay it. Also, since those people are now in debt with Los Simuladores, they might have to provide help in future drills, which is an awesome resource of continuity nods.

A comedic action/adventure show with moments of psychological drama, it is a cult series in Argentina. You can see the article (which is really complete) on The Other Wiki here

Not related to The Pretender.