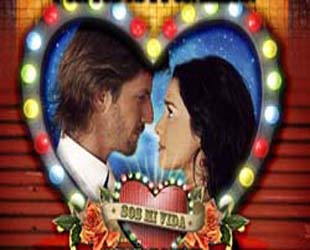 Martín and Esperanza, just about to kiss.
Sos mi vida (in Spanish, "You're my life") was a 2006 Argentine telenovela about Martín Quesada (Facundo Arana), an important businessman and driver of Formula One, and Esperanza Muñoz (Natalia Oreiro), "La monita", a poor girl working at the "Quesada Group" firm. Martín Quesada is orphan, his only living relatives are his cousins Miguel and Debbie. Miguel works at the Quesada Group and takes advantage of his relation with Martín. Other people at the firm are Alfredo (Martín advisor), Mercedes (secretary), Kimberly (maintenance), and Félix Pérez Garmendia or "Falucho" (lawyer). Martín lives with the family housekeeper Rosa and her grandson Tony. He also adopted 3 orphan siblings, José, Laura and Coqui; but the definitive legal adoption is not done until the end. He has a possesive girlfriend, Constanza Inzua.
Advertisement:

Esperanza Muñoz lives at the neighbourhood of La Boca, at a "conventillo" (a group of several low-income small houses sharing a common courtyard and some services, similar to a Mexican "vecindad"). An orphan as well, she lives with her adoptive mother Nieves, and Nieves's son, Enrique "Quique" Ferreti. Kimberly lives there as well, same as the unsuccessful actress Nilda Yadur, "La Turca", those two are Esperanza's best friends.

The series was remade in Mexico as "Un gancho al corazón".