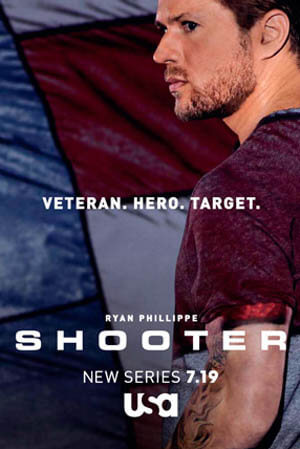 The Truth is a moving target.
Advertisement:

Shooter is a 2016 television series directed by Antoine Fuqua and produced by Mark Wahlberg, based on the 2007 movie of the same name and on the 1993 novel ''Point of Impact''. It stars Ryan Philippe, Cynthia Addai-Robinson, Omar Epps, Eddie McClintock, Shantel VanSanten and David Marciano. The first season was originally intended to air on USA Network on July 19, 2016, but was postponed due to shootings in Dallas and Baton Rouge, forcing the network to air it on November 25, 2016 instead. It received solid ratings and was renewed for a second season after only five episodes.

Bob Lee Swagger is a retired Marine who served in Iraq and Afghanistan during his time with Force Recon and the Marine Corps Forces Special Operations Command. He now lives in Seattle, Washington alongside his wife Julie and his young daughter, Mary. When his former commanding officer approaches him with an offer to help the Secret Service investigate a potential assassination threat against the President of the United States, Swagger reluctantly agrees, only to realize too late that he has stumbled into an international conspiracy intent to frame him for murder. With few people he can turn to for help — and even fewer that he's certain he can trust — Swagger sets out to clear his name and discover just how deep the conspiracy goes before the people behind it can clean up all their loose ends... including him.

The 2nd season is airing, where Swagger and his wife is under attack by hostile forces who are connected with Solotov during a party for US Marine forces stationed in Germany, which has something to do from their days when Swagger was deployed in Afghanistan with Johnson. The storyline continues in the 3rd season, where Swagger and his allies continue to take down Atlas and investigate his father's death after Solotov mentions that his murder was not from a shootout with a murder suspect, the latter based on Black Light.

The show has ended after the third season, but Paramount is actively looking for cable/streaming video providers willing to air another season.

The show contain examples of: