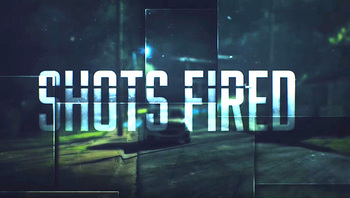 Shots Fired is a ten-part Law Procedural Thriller miniseries created by Reggie Rock and Gina Prince-Bythewood. It aired on Fox in 2017.

Jesse Carr (Jesse Leinbach), an unarmed Caucasian teenager, is shot in the small North Carolina town of Gate Station by Sheriff's Deputy Joshua Beck (Tristan Wilds), the town's only African-American officer. Governor Patricia Eamons (Helen Hunt) contacts the Department of Justice (DOJ) to determine if the shooting was lawful. Two African-American DOJ officials receive the assignment - veteran investigator Ashe Akino (Sanaa Lathan), who was previously cleared of shooting an unarmed individual and struggles to control her temper, and prosecutor Preston Terry (Stephan James), a young and confident attorney seeking to build up his reptuation. As they study the shooting, Ashe and Preston soon learn about the unsolved death of African-American teenager Joey Campbell (Kelvin Harrison Jr.), which has seemingly gone unnoticed outside of Gate Station.

Also connected to the investigation are:

As Ashe and Preston continue their work, they begin to inquire about a potential conspiracy that led to Joey's shooting being covered up...