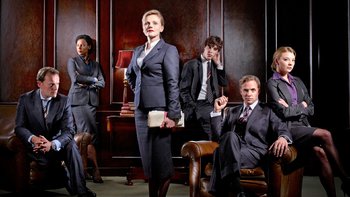 "Do you think she'll get silk?"
Advertisement:

Silk was a Law Procedural produced by The BBC, starring Maxine Peake and Rupert Penry-Jones. First aired in 2011, the show focuses on a group of London barristers, notably Martha Costello, who has had to fight her way up the ranks, and Clive Reader, who's got plenty of charm and cash. Both Martha and Clive want to become part of Queen's Counsel (called "taking silk"), but only one of them can get there. Add to this the scheming of senior clerk Billy, who sees everything that goes through chambers, and you've got yourself a recipe for disaster. Or, as it may happen, good television.

They all wear wigs and flowing gowns, and spend a lot of time reading legal briefs.

The show ran for three seasons and concluded in March 2014; while it was announced at the time this was a decision to "go out on a high" by Peter Moffatt, however subsequent Twitter comments and a strange ending imply the BBC pulled the plug themselves.