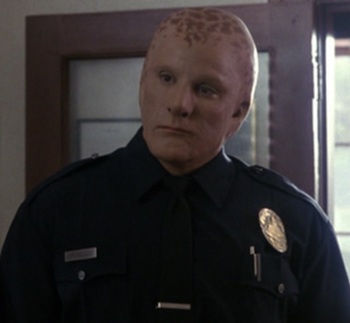 "Oh, you know me, do you? You know how it feels when the monkey sounds start? When the bananas are piled up outside your locker? If I make it through a month without murdering a colleague, they ought to erect a statue of me. I didn't sign up to be a bloody standard-bearer. I mean, why should I have to fight all the battles?"
— Glen Fletcher, Life on Mars (2006)
Advertisement:

While being a minority in any field of work can be a difficult experience, it can be even more difficult when the job in question is the police; after all, compared to other career fields, a minority in the police may be called upon to arrest or even kill members of their own group.

When a member of a minority group joins the police, it can be a double-edged sword; on the one hand, there may be suspicions from other police officers that they'll go easy on a suspect if the suspect is "one of their own", while the community they come from might view them as a sell-out or even a full-on Boomerang Bigot. Sometimes, their biggest critic could be themselves, worrying about whether or not they are doing the right thing by joining the police, or pressuring themselves to be a Flawless Token.

On the other hand, minority victims and witnesses might be less hesitant about speaking to a police officer who has the same background as them; furthermore, there's a good chance that the police officer possesses knowledge about their group that other officers don't, including language skills if they are from a group that speaks a different language.

Can result in a Salt and Pepper pairing, and/or a Wunza Plot. They Fight Crime!, naturally enough, fits in with this trope perfectly. If they're the first police officer of that group on the force, then it's Breaking the Glass Ceiling. This may cause them to be the Token Minority. They're also likely to have to face down an Intimidating White Presence.

Who counts as a minority can depend on the location and era: an Irish or Italian police officer in 19th-century America is this trope, but one in contemporary America is not this trope. Can also be non-human, such as a sentient animal, robot, or alien, if Fantastic Racism results in that group being discriminated against in-universe.

Note: In order to be this trope, an officer's minority status has to have had an effect on their career, for better or worse.