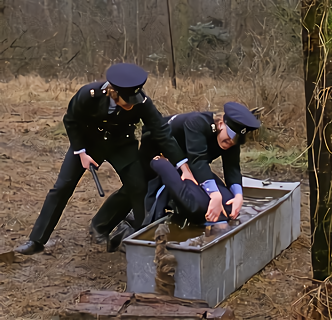 "Stop resisting!"
"I'm on my feet for about ten minutes before the cops kick them out from under me. They don't ask me any questions. They just keep knocking the crap out of me and waving a confession in my face. And I keep spitting blood all over it and laughing at how many fresh copies they come up with. Then along comes this worm assistant district attorney who turns the recorder off and says if I don't sign their confession, they'll kill my mom. I break his arm in three places and I sign it."
—Marv, Sin City
Advertisement:

When police aren't useless, then they're vicious bullies, or at very least, just big jerks.

Even though nobody likes being bossed around by the police, it's their job and they have to do it whether we (or they) like it or not. Some types of policemen, however, are thugs who take cruel pleasure in beating and tormenting people they don't like, for no reason at all.

Though this is Truth in Television, it is often exaggerated in fiction, whether for dramatic effect or perhaps to push political agendas. Sometimes this may be to make a statement about ethnic/racial relations (e.g., Do the Right Thing), as part of a gloomy Film Noir-type Wretched Hive setting (e.g., Sin City), or as part of a futuristic Dystopian State Sec setting (e.g., 1984).

In movies, this was originally a portrayal only American films got away with. For example, the critics responsible for French New Wave Cinema famously complained about censorship that forbade French police being portrayed as anything but professional and competent.

Note: Now and again, American movies filmed in or set in the 1930s and '40s will show a cop shooting at an unarmed, running suspect. Though this would not be acceptable in an American context today, it was not considered brutal or excessive at the time.

If you are fortunate enough to live in a relatively free country and unfortunate enough to witness police brutality, surreptitiously filming it is a good way to back yourself up.note  However, you need to also be mindful of the fact that a number of areas have legally banned videotaping the police – ostensibly on privacy grounds – and police in those localities will be empowered to arrest you if they see you filming (or at least confiscate, and/or smash your camera). Even in areas where it's not actually banned, the police typically do not like being filmed, and may well take steps against you if they think they can. In many jurisdictions nowadays, the police themselves often wear cameras to film arrests and make it easier to avoid misunderstandings, and/or abuse.

A common way to make a Rabid Cop character. Not to be confused with the Police Brutality Gambit, although its users hope you will. See Killer Cop for when the police officer goes a bit beyond brutality. A combined subtrope of this and Hellhole Prison is when correctional officers/law enforcement in a detention setting such as a jail or prison are just as bad, if not worse, than the other inmates for brutality. This is also pretty much certain to occur if The Bad Guys Are Cops.

The Inverted Trope is a Cop Killer, though the tables will be probably turned back around when the cops catch him, and not least because police camaraderie really is that strong. Compare Rage Against the Legal System.

If a type of animal is used for this trope, they will almost always be police dogs.

No Real Life Examples, Please! While sadly this does happen almost all of the time, mentioning any real case in particular would be a sure way to bring on a serious Flame War, and we're not here for that.