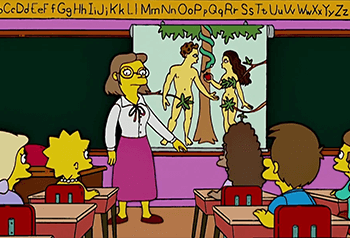 When Ned Flanders and Reverend Lovejoy manage to force the schools to teach creationism, Lisa faces jail time for teaching evolution. Her only hope lands in Marge, who comes up with a solution to save her daughter.

Done as an intentional reference to "Mission: Impossible," no less!

Done as an intentional reference to "Mission: Impossible," no less!