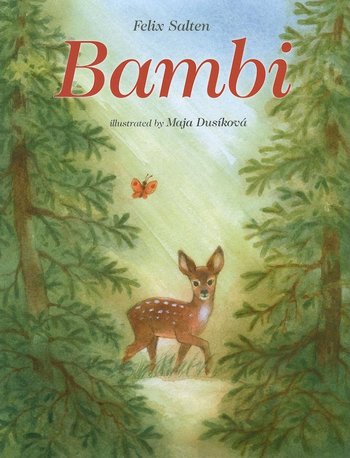 Bambi, a Life in the Woods (Bambi, Eine Lebensgeschichte aus dem Walde) is a classic 1923 novel by Austrian author Felix Salten. It is a Coming-of-Age Story about a roe deer named "Bambi" as he grows up in a forest in Austria.

In 1939 Bambi received a sequel in Bambi's Children: The Forest of a Family (Bambis Kinder: Eine Familie im Walde) revolving around Bambi and Faline's offspring, Geno and Gurri.

In 1942 the first book received an Animated Adaptation in Disney's Bambi. Though Disney never animated Bambi's Childrennote Walt considered it, though plans never made it past conceptual stages, a Comic-Book Adaptation was made.

In 1985, a Soviet live-action adaptation of the story titled Bambi's Childood (Детство Бемби) was released in Russia directed by Natalya Bondarchuk.

The book entered the Public Domain in 2016 in the European Union and 2022 in the United States.