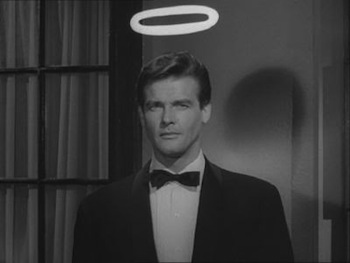 "Baby I can see your halo, you know you're my saving grace..."
"You're the famous Simon Templar!"
— The end of every pre-credits sequence
Advertisement:

The series started in 1962. Its hero is charming, well-dressed, intelligent, British and ready to fight the bad guys—not to mention played by Roger Moore. We're talking, of course, about The Saint.

Created by Leslie Charteris in a series of books, Simon Templar, nicknamed The Saint (because of his initials), is a world-famous amateur detective who operates as a modern-day Robin Hood. Many episodes of the Moore series adapted short stories and novels from the book series.

Aside from providing Moore with his defining pre-007 role (by the time the series came to an end in 1969, Moore was the highest-paid television actor in the world), The Saint was also a significant milestone for Lew Grade and his production company, ITC Entertainment; with 118 episodes, it was outlasted only by The Avengers (1960s), and enjoyed enormous success internationally. It has been credited as earning ITC as much as $350 million, and along with the aforementioned Avengers paved the way for ITC's sprawling catalogue of (usually much shorter-lived) adventure and mystery shows, including The Champions (1968), Department S, Jason King, The Baron, Man in a Suitcase and many others.

After it finished in 1969, it was followed in 1978 by a revival titled Return of the Saint starring Ian Ogilvy. Virtually identical to the Moore series (right down to the opening narration), except for being set in the late 1970s, the revival lasted a single season. Additional attempts have been made to bring Simon back to TV, the most successful (to a degree) being a series of Australian-made TV movies that were syndicated in North America in the late 1980s.

Alternative Title(s): Return Of The Saint