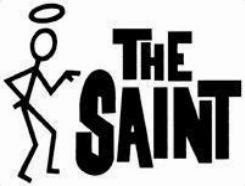 The Saint is a long-running franchise, created by Leslie Charteris, surrounding the exploits of international adventurer Simon Templar.