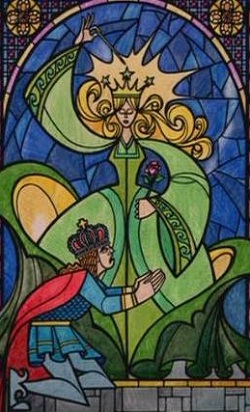 I don't care who I have to turn into a teapot, you'll learn the meaning of love!
"All you've caused is pain and strife, so now you're doomed to live a dog's life! A dog you'll be, with fur and fleas, until you do 100 good DEEEEDS!"
— The Drifter, One Hundred Deeds For Eddie Mcdowd

When there's a character that needs to be taught a lesson, sometimes another character doesn't wait for karma to take its toll. The Aesop Enforcer purposefully and forcefully inflicts some sort of change in order for the subject to learn An Aesop, usually sticking around to watch the subject's behavior or even inform them of their progress towards redemption.

Common examples include a Beauty being turned into a Beast because they refuse to see inner beauty; The Protagonist is approaching an event horizon, when they get a Wonderful Plot to show why they need to stay the way they are; A Jerkass gets a Karmic Transformation, becoming what they hate, or a Baleful Polymorph that puts them at the mercy of their victims. When there's someone behind it all, ensuring that the subject learns their lesson, or suffers for their hubris, then you have an Aesop Enforcer.

In straight examples, the Enforcer will be supernatural in some way. Mundane Aesop Enforcers run the risk of having their plan backfire, possibly getting An Aesop of their own once the subject realizes they're being manipulated, or takes their lesson to the extreme. When an Aesop Enforcer's lesson also affects those who had nothing to do with the character's wrongdoing (usually by making them suffer in order to teach the lesson) then we have a case of Aesop Collateral Damage.

Subtrope of Mentors. Compare The Kid with the Leash, who stays around long-term and proactively punishes bad behavior.