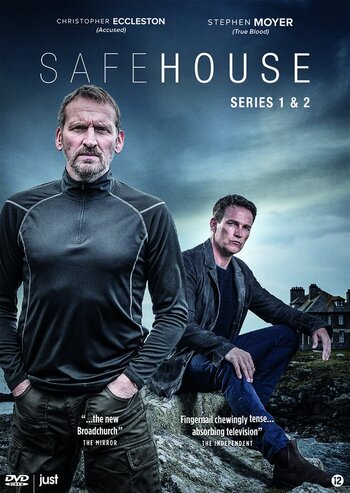 Safe House is a British Cop Show/Police Procedural show aired by ITV in 2015. It stars Christopher Eccleston and Marsha Thomason as a married couple responsible for running a part-time safehouse from a rural home in Lake District, located in northwest England in the county of Cumbria in the first season. The second season starred Stephen Moyer and Zoe Tapper. It has two seasons, the second of which aired in 2017.

The show starts when ex-Greater Manchester Police Serious Crime Division officer Robert retires to Lake District after a witness under his custody was assassinated despite having placed all appropriate measures to ensure the witness' safety. Distraught over being responsible for the witness' death, Robert resigns from the force and lives in Cumbria with his wife Katy. After living in the area for a few months, Detective Chief Inspector Mark Maxwell shows up and asks the couple if they can help protect a family, whose son was nearly kidnapped by an unknown man in Manchester County. They agree to do so and help the family hide in their house. Some of Robert's old secrets begin to pop up as he helps the family cope with living under a false name and soon learns that Mark's appearance in Cumbria may be tied to his work back in the GMP while figuring out if the family has some secrets of their own.

The second season begins with another main character, and safe house, this time set in Anglesey, when ex-officer Tom Brook (Stephen Moyer) helps Merseyside police investigate a series of old cases that relate to abductions of women by a kidnapper known as "The Crow". While investigating the latest case of an attempted kidnapping that may have "The Crow"'s signature, Tom tries to figure out if this has to do anything with suspicious characters he met in the last few days...