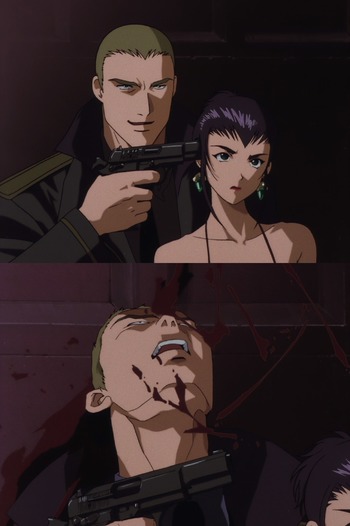 "So ya feelin' like a big man now?"
Frank Reagan: Get your hands off my daughter.
Erin Reagan: Dad.
Dick Reed: You just try it— [Frank shoots Reed between the eyes]
— "Re-Do", Blue Bloods

A villain uses a hostage as a Human Shield to deter the hero from attacking them and compel the hero to give in to their demands. Unfortunately for the villain, a human shield can only protect so much, and areas like the villain's head or arms are still exposed. This allows the hero or a third party to just shoot one of those areas instead (usually the head) and save the hostage anyway. The Gunslinger and the Cold Sniper are the most likely to attempt this strategy, whereas the By-the-Book Cop usually will not. In real life, there are several very good reasons the police don't engage in this when somebody has his hands on the trigger. Putting aside the difficulty of hitting only the hostage taker, even an on-target shot may fail to incapacitate fast enough, and can even cause them to discharge their weapon.

A common form is for the hostage taker to get out about half a sentence of Put Down Your Gun and Step Away before the No-Nonsense Nemesis headshots him.

Often involves Improbable Aiming Skills. A more specific form of Aggressive Negotiations. Can backfire and turn into Shoot the Hostage and, in turn, One-Hit Polykill.