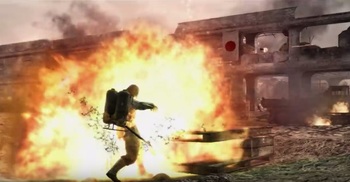 Heh. Daniels always did enjoy a good roast.
A Sub-Trope of Man on Fire, for when the person carrying the flamethrower (and its fuel tank backpack) burns to death (or simply disappears in a fireball) when his/her pack is hit, or for when a bullet strikes a Molotov Cocktail or incendiary grenade before the person carrying it has a chance to throw it. Would also count if the soldier manages to ditch the burning equipment before they themselves ignite (i.e. for a smoldering grenade attached to their web gear).
Advertisement:

Not actually Truth in Television. While shooting or otherwise damaging the tank of a flamethrower will make it leak, the fuel won't ignite immediately (even a tracer bullet isn't guaranteed to do so, since there's no oxygen inside the tank) unless something else ignites it. The fuel used by flamethrowers is also actually somewhat difficult to ignite and slow burning, which is what allows it to be fired in a targeted stream without igniting the backflow. Put simply, flamethrowers do not explode because this scenario occurred to the designers.

That is not to say, however, that the experience is likely to be pleasant for the operator or anyone standing nearby. For starters, anyone who has seen a ruptured aerosol can or air tank knows that it would be very bad to have one strapped to your back. As the punch from your metal backpack knocks you down, then even if you managed to avoid being torn open by its warped edges, a caustic, slippery, noxious, and potentially flammable substance is now spraying at high pressure onto you, your comrades, and your surroundings. Given that one is holding an ignition source designed to ignite said substance, all it takes is a clench of the hand on the trigger to take things from bad to Nightmare Fuel. While not a recipe for an explosion, it is a great way to ruin someone's day.

Sister trope to Reliably Unreliable Guns. See also Hoist by His Own Petard. Compare Shoot the Fuel Tank, where the target is a vehicle but the results are similarly explosive. For other convenient, if unrealistic, sources of Stuff Blowing Up, see Exploding Barrels, Every Car Is a Pinto, and the other SubTropes of Made of Explodium.

Contrast Video Game Flamethrowers Suck, as a Flamethrower Backfire in a video game is usually to the player's advantage: often, the player can make enemies' flamethrowers explode, but not vice versa. Also see Pineapple Surprise.

Hitting a Streetcleaner in their flamethrower's fuel tank is a fast way to dispatch them along with any other enemy caught in the blast (yourself included).

Hitting a Streetcleaner in their flamethrower's fuel tank is a fast way to dispatch them along with any other enemy caught in the blast (yourself included).