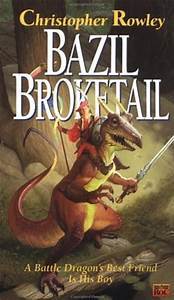 The cover of the first and eponymous book
Bazil Broketail is a series of fantasy novels released in the 1990s by author Christopher Rowley. They center upon the titular character, a wingless soldier dragon and his squire (dragonboy) Relkin. Both of them serve in the Argonathi military fighting a long-standing war against the Masters of Padmasa, evil wizards who seek to conquer their entire world, Ryetelth, and the monsters they command. The benevolent witch Lessis of Valmes is a major supporting character, fighting the enemy on the magical side, as is her apprentice Lagdalen of the Tarcho. In a series which spans seven books, they all go on many hardships and adventures combating repeated invasions from Padmasa.
Advertisement:
Books in the series