Born in the Saddle 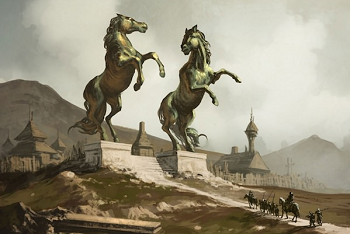 "Vaes Dothrak... the city of the horselords."
"A Mongol without a horse is like a bird without wings."
— Traditional Mongolian saying
Advertisement:

Expect a lot of jokes about just how much they love their horses.

Often a Fantasy Counterpart Culture to Turks, the Mongols and/or the Huns, and as such have a distinct tendency to function as Hordes from the East, Barbarian Tribes, and/or Noble Savages. However, as the Rohirrim in The Lord of the Rings demonstrate, they can just as well be a more chivalric and "civilized" culture. Don't be surprised — "chivalry" derives from the French word "chevalier," a horseback rider or knight. Whether or not they're the bad guys, they're sure to be a Proud Warrior Race (you can't get much studying done at a canter, after all).

Usually expert Horse Archers, though tend to be just as good with a sword.

Sometimes the steed of choice will be a Horse of a Different Color, but actual Equus f. caballus seem to be favored for some reason. Compare Born Under the Sail for cultures strongly associated with seafaring instead of horse-riding.

Often a variant of a Wandering Culture.