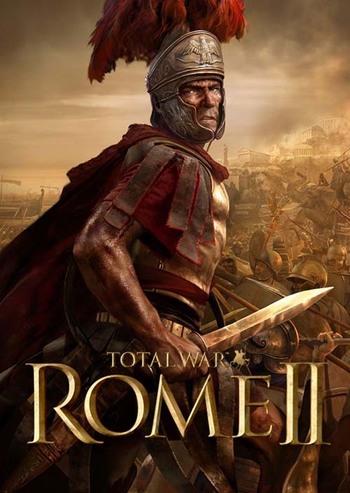 Roma Invicta
"How far will you go for Rome?"
Advertisement:

Total War: Rome II is a game in the Total War strategy series, released on September 3rd, 2013. As a sequel to Rome: Total War, it returns to classical antiquity and the rise of the Roman Republic/Empire. Several new features have been introduced, such as combined land and sea battles, an abstract "tactical" map for battlefields and the combination of territories on the turn-based strategy map into larger "provinces".

As in the original Rome, if the player takes control of the Roman faction, than they must choose one of several patrician houses to represent — Cornelia, Julia, or Junia — each enabling their own unique perks. Campaign goals remain the same for the player, regardless of whichever family they select; how those goals are achieved depends on personal discretion.

The player is also able to control several other factions

, which present similar options for internal politics. Eight playable factions were included with the base game, with additional playable factions subsequently released as paid or free DLC. In total, over 100 factions appear on the campaign map, although most of these are not playable.

In addition to the main campaign, there is also a prologue campaign set during the early years of the Roman Republic that serves as a tutorial. The player follows the rise of Gaius Fulvius Silanus during the Samnite Wars, which would lay the foundations for the rise of Rome.

On the 16th of September, 2014, the game was updated to the Emperor Edition for all existing and future players at no additional cost. In addition, it automatically includes the new Imperator Augustus campaign, which follows the civil war between the former members of the Second Triumvirate (Gaius Octavian, Marc Antony and Marcus Lepidus) and Sextus Magnus Pompey for control of the Roman Republic, while factions on the outskirts of the Republic plan to take advantage of the chaos to their own ends.