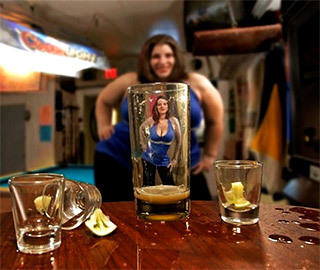 Beauty is in the eye of the beerholder.
"There is no such thing as ugly women... there's just not enough Vodka!"
— Russian Saying
Advertisement:

The term "beer goggles" is slang for the phenomenon in which consumption of alcohol lowers sexual inhibitions to the point that the intoxicated man uses little to no discretion when approaching or choosing sexual partners. Subsequently, the former trope name, Ten With a Two, refers to the man (now sober) later regretting advancing on a woman that he knows (or realizes) would be inappropriate or unattractive while sober.

In some cases, the numbering scenario comes into play, with the protagonist rating his target (regardless of success) on a scale of 1 to 10. To a sober man, a "1" would be someone who is very ugly while a "10" is the perfect, most physically attractive woman. With the "beer goggles" effect in play, usually any woman-–regardless of perceived or actual physical beauty—will rate at or near the top of the scale.

The trope has found its way into the subject matter of several songs. While usually humorously applied, usually by a sober woman observing an intoxicated man approach his (usually ugly) target, it can have negative meaning as well.

Best way to get past a Butter Face. See also But Liquor Is Quicker.

Completely unrelated to Goggles Do Nothing, which actually does something outside of aesthetic purposes, while this trope doesn't when sober. And not to be confused with Beer Googles, where you search the web while drunk.