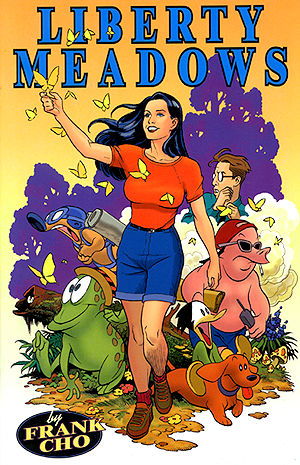 An award-winning newspaper comic strip, and later Comic Book, created by Frank Cho. It was syndicated in newspapers from 1997-2001, and since then has been collected in comic book form by Insight Studios and Image Comics.

The strip concerns both the human and animal denizens of Liberty Meadows, an animal sanctuary/rehabilitation clinic. Said denizens include Brandy Carter, a beautiful animal psychiatrist; Frank Mellish, a nerdy veterinarian with a huge crush on Brandy; Al, the often-injured handyman; Julius, the beleaguered owner; Ralph, a mad-scientist/former circus bear; Dean, a lecherous sexist pig (literally, a pig); Leslie, a hypochondriac frog; Truman, a cute and naive duckling; and Oscar, a mischievous dachshund (and one of the few animals not to talk). Other characters include Al, an over-qualified bartender with a penchant for conspiracy theories; Jen, Brandy's rocket-scientist roommate with a fondness for toying with men; Roger, Brandy's ex-fiance who constantly schemes to win Brandy back in that Romantic False Lead kind of way; and Frank Cho, the author who appears as a monkey.

The strip is notable for how Cho freely mixes visual styles in the strip, drawing the majority of the cast like Walt Kelly's anthropomorphic animals, borrowing Dave Stevens's pin-up look for Brandy, Franklin Booth's lush landscapes and routinely throws in the styles of whatever artists and cartoonists Cho feels like homaging at the time.

Though it started its life on the comics page, after four years, Cho pulled it from newspapers claiming to be tired of dealing with newspaper censors. Most of the censorship concerned the large amounts of Looney Tunes-esque violence, as well as Brandy and Jen, who were drawn in a style notably sexier than just about anything else on the comics page (with tons of Male Gaze to boot) and who were written (specially Jen) as clearly aware of their sexuality in ways few other newspaper comics character have been. Another constant concern was Dean who, well, acted realistically lecherous and not just "newspaper comic" lecherous, if that makes any sense. Truthfully, the censored strips

aren't that bad... they just toe the PG-13 line in ways newspaper editors were not comfortable with. Let's just say they didn't have these problems with The Born Loser.

After leaving the syndicated, Cho self-published the comic book until issue #27, with Image Comics taking over printing and distribution. The comic book went on a hiatus in early 2004 after issue #36 until June 2006 when issue #37 came out, the last issue published so far. Cho has said that he hopes to start the book up again soon.

The strip began as "University-Squared" in The Diamondback newspaper at Cho's alma mater, the University of Maryland. It was essentially a beta version for Liberty Meadows, and featuring Brandy, Dean, Leslie, Ralph and others (and Frank was an anthropomorphic duck).