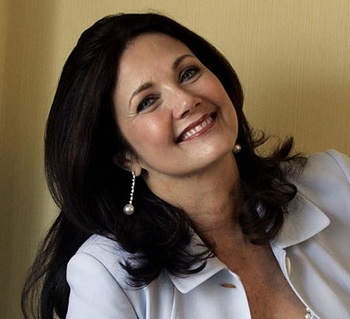 "I just want my audiences to be entertained and feel like they're part of the show. I want to show them a good time and create an experience they're going to enjoy."
Advertisement:

Born in Phoenix, Arizona, she was crowned Miss World USA 1972. She's most famously known for portraying Wonder Woman in the eponymous TV series (1975-1979). Ironically, another beauty pageant titleholder took the mantle several decades later, with her blessing and support. She also coincidentally enough has the same birthday as that film’s director.

Her film debut came in 1976 B-Movie Bobbie Jo and the Outlaw but she did most of her work on television. She's made countless appearances in TV series, most recently as US President Olivia Marsdin in Supergirl. Before that, she appeared in Smallville, joining a long list of previous DC Comics adaptations actors being recast as homage in new DC-inspired material.