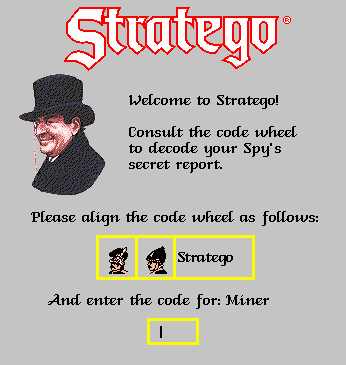 Code wheel? ... But I downloaded the game! DAMN IT!
"Okay, here's the dumb copy protection. In your documentation find the X/Y coordinates (letters) for each of the two displayed symbols."
— Space Quest IV, telling you how to acquire the code once you've entered the Timepod (Disk Version Only)
Advertisement:

When a player purchases a video game, how does the developer prevent them from simply making an illicit copy of the software and giving it away to a friend? Unlike physical merchandise (such as books), video games exist as electronic data, which is quite easy to make perfect copies of.

This has been a concern for game makers even from the start, so throughout the years they've come up with a variety of ways to verify that whoever is playing their game has fronted the proper cash for that privilege. A few examples:

Unfortunately, all of the above methods are beatable (sometimes trivially), slightly intrusive on the end user, and if they malfunction they can even lock a legitimate player out of their own game. Instruction manuals can be photocopied (despite efforts to make this difficult) or just plain lost, physical game discs age and eventually go bad (making perfectly-legal archival/personal backup copies won't help if the game uses a key-disc method), and so on. Sometimes, a method becomes viewed as so intrusive that the player may simply choose to avoid running the game at all... or decide "screw it" and download a cracked, pirate version, thus leading to the exact opposite of what the publisher intended.

This has resulted in something of a vicious cycle between game publishers and unlicensed copying ("piracy"), where when one copy-protection system is cracked or beaten, the publisher must switch to (or create) another, stronger method, which is itself beaten (sometimes quickly), and so on. Where does it end?

In the early days, the physical game media itself (game cartridges, CD-ROM) was sufficient to ensure that it was a legal copy, on the grounds that the equipment to produce them was difficult (if not impossible) for the general public to obtain. This is no longer the case these days, especially with the Internet where it's fairly easy to find not just downloadable copies (legal or otherwise) of the software itself, but any and all of the pass phrases, manual clues, or the entire solution to a copy-protection puzzle.

The Internet itself has brought the latest version of copy protection: Client-server verification, where the player is the "client" and their legal right to play the game is recorded on a central server database. The server is the central authority on who is (and by extension, is not) allowed to play the game, and can easily verify this with any given client, either during the game's initial installation or first time startup, or sometimes every time the game is run. While this comes naturally to certain genres (MMORPGs in particular), it can be a problem for others; for example, even if the game doesn't have any online features, it may still refuse to run without an Internet connection or if the central servers are down. It also has the issue of possibly leaving legitimate users with an unplayable legal copy if the parent company closes or decides to discontinue support on their end and hasn't planned for anyone else to take over. And again leading to vicious cycles, this can lead to instances where the protection is so restrictive to legitimate users that they might decide to pirate the game even when they intended to buy in the first place just to play a version that bypasses the whole thing.

Proprietary media and other media-based protections

In order to progress, the player needs to type in a pass from a page in the manual. Failure to do so results in a game over.

In order to progress, the player needs to type in a pass from a page in the manual. Failure to do so results in a game over.