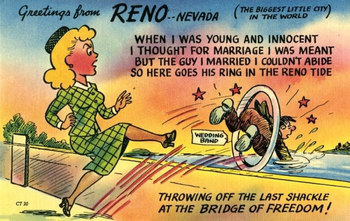 A Forgotten Trope popular when divorce was difficult in most of the United States but much easier in Nevada. In the early 20th century, most American states had fairly strict divorce laws, often only granting divorces for specific cause (abandonment, adultery, etc note  And in many cases, Domestic Abuse wasn't on that list, as it was seen as a private matter rather than a public health and safety issue, and also seen as something the victim deserved, rather than a wrongdoing on the abuser's part. ) and often requiring a long waiting period, and for both spouses to be present in the courtroom. No-fault divorce was rare until The '70s after California introduced it in 1969, and more and more states began to follow suit. (The last state in the Union to adopt no-fault divorce, New York, only did so in 2010.) In Nevada, however, no-fault divorce was legal by the early 20th century. Even more significantly, in 1931 the residency requirement to establish residency in Nevada, and thus be able to get divorced in Nevada, was reduced to only six weeks. So while in most of America one would have to wait quite a long time to get a divorce, and one would probably have to show cause why one should be allowed a divorce, one could go to Nevada and get a divorce in six weeks, no questions asked.

Many old movies and plays about the fashionable upper classes will have characters travel to Reno, Nevada, to obtain painless divorces. (At this time Reno was by far the biggest city in Nevada, as Las Vegas did not start developing until The '50s.) Reno businessmen went out of their way to attract those seeking Nevada divorces with specialist lawyers and affordable extended-stay hotels. Eventually, as the other 49 states liberalized their divorce laws, thus making divorce vacations to Nevada unnecessary, this became a Forgotten Trope. (Well, not quite. Nevada is still used for these kinds of divorces, but today the main reason is to bypass the community property

laws of some states, most notably California. Another reason is to get the juiciest settlement possible; a notable use of this trope is England - which ironically doesn't technically have no-fault divorce - using the process known as "forum shopping

Other places with lax divorce laws, known on That Other Wiki as divorce mills

, may also serve the same purpose. That Wiki also has a page on a similar practice involving Mexico

The Inverted Trope, where people go to get married because marriage is easier there, is Elopement.

open/close all folders
Films — Live-Action
Examples set in (or about) Reno, Nevada:

Examples not set in Reno: