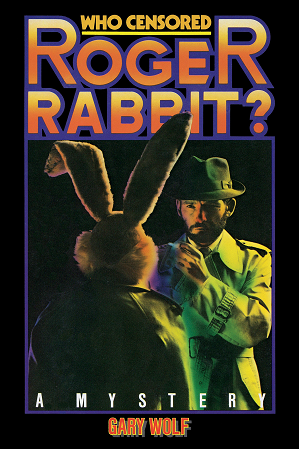 A note to my clients:
Roger Rabbit and his screwball buddies play fast and loose with historical accuracy. That's the way things happen in Toontown. Take it from a guy who's been there. Relax, hang on, and enjoy the ride.
Eddie Valiant
Private Eye
Los Angeles, California
1947, more or less
Advertisement:

Eddie Valiant is a private detective in a world where cartoon characters—called "Toons"—are real, living beings who coexist with humans. Although he strongly dislikes Toons, Eddie accepts a case from a Toon rabbit named Roger, a small-time cartoon actor, who wants to know why his boss, Rocco DeGreasy, won't sell his contract to a mystery buyer who promises to make him a star.

As Eddie investigates the case, Roger is unexpectedly shot dead and robbed of a seemingly worthless tea kettle. Eddie is then met with Roger's "doppelganger"—a kind of ghostly double that Toons are able to manifest to help with their more difficult stunts (such as being flattened by an anvil or blown up by a stick of dynamite)—who implores him to find his killer before he crumbles to dust. Meanwhile, DeGreasy and Roger's estranged wife Jessica independently approach Eddie, offering handsome rewards in exchange for the missing kettle.

The novel is an affectionate parody of both Chandleresque hard-boiled detective fiction and classic comic strips and cartoons, frequently highlighting the former's cheesiness (especially via Eddie's over-the-top gumshoe patois) and the latter's gruesomeness and violence. Its more famous film adaptation, Who Framed Roger Rabbit, made several radical changes to the story, making it much Lighter and Softer.

It has two sequels, Who P-P-P-Plugged Roger Rabbit? and Who Wacked Roger Rabbit? Curiously, they're both sequels to the movie, not the original novel, even though both were written by Wolf himself. They're also mutually exclusive, to mimic the loose continuity of the classic cartoons that inspired it.