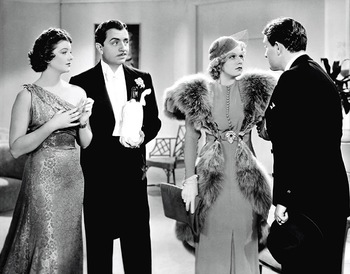 Warren Haggerty (Tracy) is the editor of the New York Evening Star. His paper has just published a story about Connie Allenbury (Loy), a rich society lady who supposedly tried to break up the marriage of a British duke. Unfortunately the story turned out not to be true, and Connie is suing Warren's newspaper for a $5 million libel judgment. Haggerty hires ladies' man and former reporter Bill Chandler (Powell) to fix things. Chandler hits on a scheme to discredit Connie's lawsuit: he'll enter into a Sham Marriage, then seduce Connie so she can be portrayed as breaking up another marriage. To set up the scheme, Haggerty supplies Chandler with a convenient wife—his fiancee, Gladys Benton (Harlow), who is tired of Haggerty neglecting her and dodging marriage.

One of fourteen, count 'em, fourteen films that Powell and Loy starred in together. Nominated for the Academy Award for Best Picture, but lost to The Great Ziegfeld, another Powell-and-Loy film.