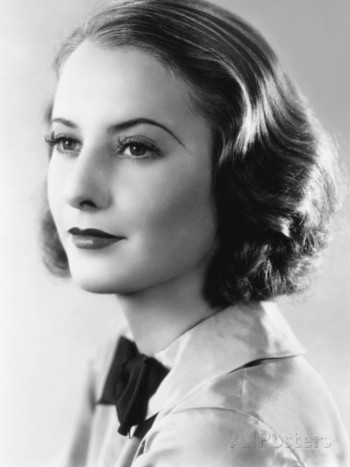 "I'm a tough old broad from Brooklyn. I intend to go on acting until I'm 90 and they won't need to paste my face with make-up."

Barbara Stanwyck (born Ruby Catherine Stevens; July 16, 1907 – January 20, 1990) was one of the greatest screen actresses of Hollywood's studio era, who appeared in both movies and television and had successes during The Pre-Code Era and The Golden Age of Hollywood.

She had a rough childhood. Stanwyck was orphaned at the age of four when her mother died from a car crash caused by a drunk and her father disappeared while working at the Panama Canal. Stanwyck's sister Mildred got a Promotion to Parent at the ripe old age of nine. Mildred got a job as a dancer in a traveling theater troupe, and Ruby tagged along sometimes, thus getting a taste for show business. When she was 16 she got a job dancing in the Ziegfeld Follies. This led to parts on the stage, and starring roles on Broadway by the time she was 20. That, in turn, led to parts in movies in the late silent era, and by 1930, starring roles.

Directors almost unanimously praised her, whether it was Frank Capra, William A. Wellman, Preston Sturges, Samuel Fuller, Douglas Sirk and even a notoriously prickly actor-hating director like Fritz Lang called her "an angel".

Stanwyck was nominated for four competitive Academy Awards but never won. As she got older she moved to television (her last film was in 1964), most notably as the steely family matriarch Victoria Barkley in the western series, The Big Valley, and won three Emmy Awards. She also received an honorary Oscar in 1982 for her whole body of work. In 1999, the American Film Institute named her the eleventh greatest female star of classic Hollywood.

"Barbara Stanwyck and I used to take the trolley."
Feedback