The Republic of Zambia is an East African nation, home of the Victoria Falls (one of the World’s Seven Natural Wonders) and one of the places seen by Dr. David Livingstone.

The country was a British colony for a long time, then known as Northern Rhodesia (there was a Southern Rhodesia, now named Zimbabwe, infamously known for its president, Robert Mugabe, and his unlikely politics). The British held partly because it completed the belt of territory for the (never-achieved) dream of connecting Cape Town and Cairo with a road or other transportation link

(a remnant of which is that one of the major roads in Lusaka is called "Cairo Road"); the Brits also found vast deposits of copper in the country's northern part, which drove further investment. "Northern Rhodesia" achieved its independence in 1964 and was renamed Zambia (after the Zambezi river). Kenneth Kaunda assumed the presidency, holding onto it firmly until 1991. With its copper mines and good agricultural land, Zambia seemed to be in a good position.

However, as time went on Zambia had a lot of troubles. Although relatively stable and peaceful itself, Zambia suffered tremendously from the civil wars, communist regimes and political pressures from its neighboring countries. All that, along with the collapse in the copper market in the 1970s leading to drastically reduced copper prices and a massive reduction in national income, threw the country into an economic hellhole with rampant inflation and unemployment, which eventually brought the downfall of Kaunda’s government.

Zambia finally managed to recover itself by the turn of the millennium, controlling the inflation and starting to exploit the mining resources again (helped by increased copper demand from the developing economies of Asia). There has been a large influx of Zimbabweans fleeing their country in Zambia. The Zambian government has begun offering land to white Zimbabwean farmers who were chased off their lands by Mugabe's thugs. 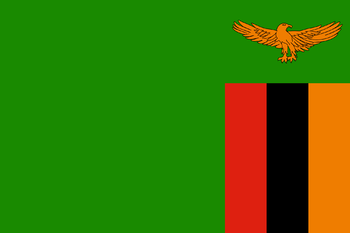 The flag is unusual in that the heraldic eagle and the block of stripes are placed at the fly (right side) instead of the hoist (left) side. The green field symbolizes flora, the red, black and orange stripes stand for the struggle for freedom, the Zambians, and natural and mineral resources, above which is an eagle, symbolizing the Zambians' unwavering nature.
Coat of arms of Zambia 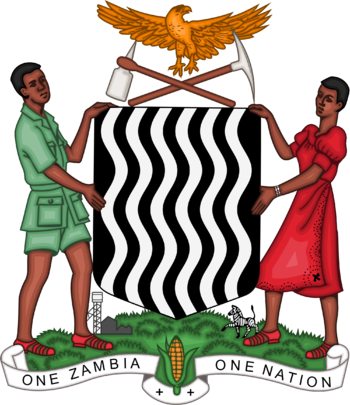