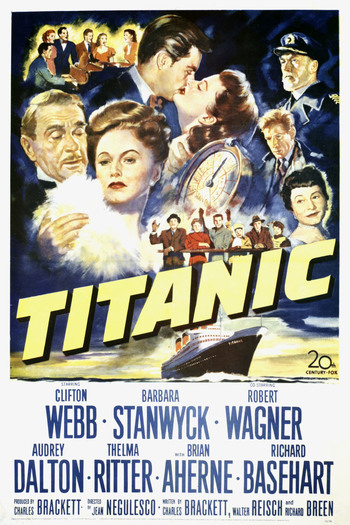 Titanic is a 1953 drama film based on the RMS Titanic disaster of April 1912, directed by Jean Negulesco and starring Clifton Webb, Barbara Stanwyck, Robert Wagner, Audrey Dalton, and Thelma Ritter.

Like most films on the topic, this version features some characters based on actual Titanic victims and survivors; however, most of the lead characters and subplots are fictitious. The core plot revolves around the Sturges family.

Richard Sturges (Webb), a wealthy American expatriate living in Paris, buys a last-minute ticket for Titanic’s maiden voyage in order to find his wife Julia (Stanwyck) and his two children, 18-year old Annette (Dalton) and 10-year old Norman (Harper Carter). Julia is displeased with her life in Europe and wants her kids to be raised down-to-earth Americans, rather than Idle Rich elite Europeans. Previously having been in the dark on the issue, Annette insists that she go back to Paris with her father. After a particularly ugly argument, Julia reveals a long-kept secret that she's been hiding for years. This leads Richard to abandon his wife and son. Around this same time, an attractive college tennis player named Gifford "Giff" Rogers (Wagner) notices Annette and falls for her. After initially brushing him off, Annette eventually starts to warm up to Giff. Unfortunately, not too soon afterwards the ship’s lookouts notice an incoming iceberg...

Despite sharing the same title and basic premise (a fictional soap opera using the sinking of the Titanic as a backdrop), the James Cameron film is not a remake of this one.