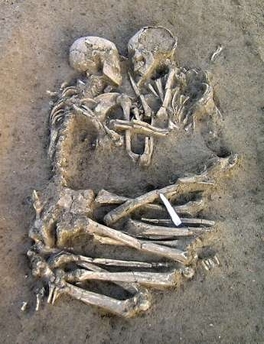 "Death cannot stop true love. It can only delay it for a little while."
— Westley, The Princess Bride

Fate may have kept them apart, the world may have frowned on their love, and conflict may have wormed itself between them, but they're finally together — too bad they had to die for it to happen.

Together in Death is when a couple is literally or metaphorically reunited in death. They might be buried together, seen together in the afterlife (most often in Heaven or a similar paradise, but not always), or their corpses discovered embracing one another. It's not necessarily a romantic couple — it can just as easily be a pair of siblings, a parent and child, or a couple of True Companions.

This is a good way to show the couple's devotion to one another, even unto death; it is also a tidy way to show a (lasting) reconciliation. Often forms part of a Bittersweet Ending. Less positively, the death of a loved one can be a popular motivator for suicide, in an attempt to invoke this trope. For the inversion of this trope, see Necromantic, where devotion to a loved one drives them to bring them back from death.

Compare Ghost Reunion Ending, Reincarnation Romance, Died Happily Ever After, You Are Worth Hell.

This is a Death Trope so spoilers below.