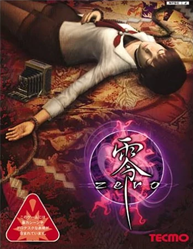 Fatal Frame is the first of the games in the survival horror series created by Tecmo.

Himuro Mansion is an old, abandoned building that is believed to be haunted, with stories of people moving into it being forced to commit suicide or spirited away by ghosts of the previous inhabitants. Mafuyu Hinasaki heads into the mansion, after his professor and some of his colleagues have gone missing. While exploring the mansion himself, he gets accosted by the spirit of a young woman.

With Mafuyu having gone missing, his younger sister heads to Himuro Mansion herself. Miku explores the mansion in hopes of finding and saving her brother, while trying to avoid getting harmed by the spirits herself. One young girl's spirit, dressed in white, appears to her often and seems to lend her a helping hand.

This spirit wants Miku to find the pieces of the broken Holy Mirror and fix it, wanting her to re-close the Hellgate within the depths of the mansion and letting the ghosts of the deceased move on.