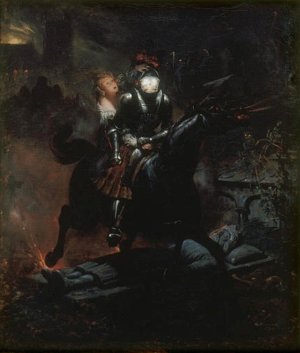 "Lenore"—also translated into English as "Ellenore", "Leonora", "Leonore" and "William and Helen"—is a German Gothic ballad by Gottfried August Bürger (1747-1794), published in 1774.

The Seven Years' War is over, and the soldiers return to their loved ones. Lenore waits impatiently for Wilhelm, her fiancé. But Wilhelm is not among the homecomers, and it dawns on Lenore that Wilhelm might be dead.

Her parents' clumsy attempts to console her only make Lenore freak out more and more, culminating in her accusing God of cruelty and injustice. Her mother warns her earnestly against the sin of blasphemy, but to no effect: Lenore declares that without Wilhelm, neither her life nor her salvation have any meaning to her.

Lenore is crying the night away in despair, when, at midnight, a knock comes at the door: It is Wilhelm! Instantly he declares to the overjoyed Lenore that he wants to marry her this very night, if only she will ride with him to his present place of residence.—If you know a thing or two about ghost stories, you probably know that Lenore is making a mistake when she mounts that black steed behind Wilhelm.

A straightforward ghost story based on an ancient plot (No. 365: "The Specter Bridegroom" in the Aarne-Thompson tale type index), "Lenore" struck a chord with readers, who seem to have developed an appetite for supernatural horror around the time. Its popularity also spread to Britain by way of numerous translations (there are at least ten, including one—as "William and Helen"—by Walter Scott) and made it a seminal work of Gothic Horror.

"Lenore" is also considered a seminal work for its form. In the second half of the 18th century the literary world started to get interested in folk traditions, including the songs of Bänkelsänger (who related various events and misdeeds at fairs) and the "Reliques of Ancient English Poetry". A lot of these were in monotonous, rather lame-footed verse, so Bürger as a poet decided to pay intense attention to the rhythm and used onomatopoeic words in crafting his ballad. It became a smash hit from the salons of the aristocracy to open-air recitals on fairgrounds and began a fashion for ballads among German poets, leading among other things to Goethe writing "The Sorcerer's Apprenctice" and "The Erl-King". So Bürger could justly be proud of his achievement and once called himself the Genghis Khan of ballads. As he wrote to his fellow poet Heinrich Christian Boie: "Is it possible that human senses something so delightful? All those who make ballads after me will indubitably be my vassals and will take their tone from me as their fief." To Boie, who lived in the same university town as he did, Bürger also wrote a "how-to" on 6 May, 1773:

"When you read it to our friends in Göttingen for the first time, then borrow a skull from someone at the medical faculty, place it next to a dim lamp, and then read. Then the hairs of everybody shall stand on end as at Macbeth."

Although it is not obvious, "Lenore" is considered a spiritual precursor of the Vampire Genre: In folk belief, the undead were especially prone to come for their beloved ones, as they supposedly wanted them to join them in death.

and translations by Walter Scott