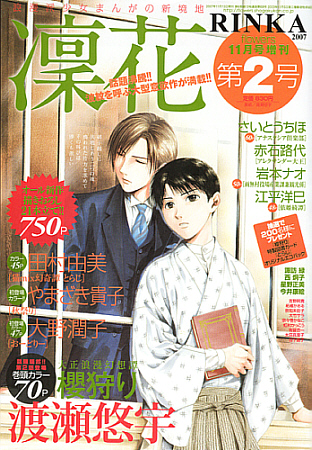 Sakura Gari ("The Hunt for Cherry Blossoms") is a Taishou Era romantic story by Yuu Watase, ten years in the making. Its chapters were published in the Rinka magazine from 2007 to 2010, then compiled into three volumes.

It follows 16 year old Masataka Tagami, the eldest son of a library owner from a small village, as he goes to Tokyo to try finding his place in life. While getting ready to take the entrance exams for the then-Teikoku daigaku or "Imperial University" (now the Tokyo University aka Toudai

), he encounters Souma Saiki, the 25-year-old son of the distinguished Saiki Koushyaku family, and becomes part of the Saiki household as a mix of boarding student and servant. The Saiki household and Souma himself, however, are hiding some very dark secrets, and Masataka unwittingly starts getting involved... and it's even worse when Masataka starts finding out about Souma's own dark and troubled mindset.

This manga is a rather explicit entry in the Josei genre, and is a departure from Yuu Watase's usual work in Shoujo romantic series, with a high quotient of explicit yaoi and very dark themes (rape, abuse, etc.).