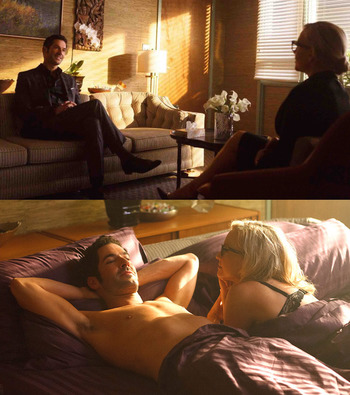 In fiction, sex heals physical wounds. But sex can also heal emotional wounds. Addiction, depression over terminal illness, PTSD... they all fade instantly the moment our protagonist is in the loving embrace of their love interest, making this the logical extreme of Sex for Solace (which may or may not make problems go away). In Fan Fic parlance, this is often called the 'magical healing cock' and mocked, as it is often Narm (or deeply offensive) when it is all too often used as a kind of therapy for victims of sexual assault. The theory goes that if bad sex hurts you, good sex with somebody you love cancels it out.

Note that Tropes Are Not Bad. Sex can be a great mood-elevator and, to some degree, help with certain hang-ups or insecurities, or even depression, due to it releasing large amounts of serotonin, a neurotransmitter, the lack of which is believed to be a significant molecular background to depression. The key issue is overstating this effect. For instance, someone with a case of Dissociative Identity Disorder (a.k.a. multiple personalities) won't suddenly "get better" after some great sex. After all, if sex completely and instantly cured all emotional wounds, there would be no therapists (note however that the depressed are less likely in the first place to be going out, to make contact or meet a partner). In fact, a person can be mentally impaired to the point they cannot consent to sex, making any sexual actions upon them sexual assault. Also, it's completely unethical for real therapists or psychiatrists to have sex with their patients, and could cost them their licenses.

Intimate Healing is much more however than 'sex' as a mood elevator to raise molecular serotonin background. The feeling of deep intimacy with another human being can and does heal major psychological wounds, and is often expressed through the act of lovemaking. It is often shown in this way in fiction, but the 'just had sex' is not the point.

See also Glad-to-Be-Alive Sex, celebrating the feeling of aliveness through sex in the aftermath of life-threatening experiences.

Toxie's therapist seems to be sending a few signals his way.

Toxie's therapist seems to be sending a few signals his way.