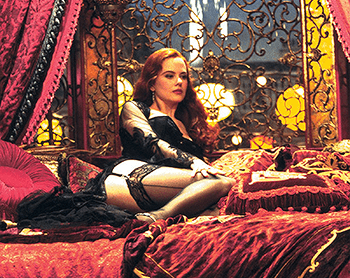 It's not enough to just look good. She needs the charm and talent to back up her beauty.
"Voulez-vous coucher avec moi ce soir?"note French: "Would you like to go to bed with me tonight?"
— Lady Marmalade
Advertisement:

She’s expensive; she charges hundreds per hour (or whatever the local equivalent is). She’s fashionable; she looks good in silk stockings and a court wig and robes. She’s cultured; she speaks several languages, knows her claret from her Beaujolais, and can carry on a conversation with anyone from the flower vendor to the Queen.

She's not a barrister or a solicitor (though she could just be putting herself through school and might be arguing cases in a few years yet). In simplest terms, she's a prostitute, but that label fails to capture the full breadth of her occupation.

The High-Class Call Girl - also known as an escort or "courtesan" if you're feeling fancy - occupies the highest tier of her profession, which is usually safer, pays more, and seen as more respectable than working in a brothel or on the street. On screen, it allows for attractive actresses to do plenty of fanservice, while not dealing with the truly unsavory aspects of prostitution. She moves in elite circles, and her clientele will mostly be men in the upper echelons of society (expect at least one of them to be a politician, particularly one who is always publicly touting his good old fashioned Family Values). The nature of this clientele may also lead to them becoming involved in a Hookers and Blow situation.

Historically, an upper-class prostitute was classy, well-educated, and genuinely smart, giving her more agency than most women of her time. In modern settings, she has the financial freedom to control her situation, choose her customers, and engage in Unproblematic Prostitution. She might not officially sell her body at all: she might merely sell her time, and whether sex happens during that time is up to her. Often an Ethical Slut; also likely to be a Hooker with a Heart of Gold, or to become a Miss Kitty when she's older.

See Up Marketing for other examples of selling to the well-to-do.